What is Moral Integrity?

It’s all about following the leader

Leaders affect their company directly. The decisions they make, determine how things are going to be. They are steering the ship, making sure it gets to the right port.
What they say is not as important as what they do. Every single company has heard that it’s a good idea to have a mission statement and we are always optimistic when crafting them.
Even the most corrupt agencies have inspiring messages to try to sell us. It’s easy to print out posters and paste them on the walls in the office. People don’t react to what leaders say; it’s what leaders do. They have to act in line with what they state their values are.
Leaders affect their company indirectly too. The actions that they take can make significant changes in where the company goes. The actions that they take at every turn are setting a precedent. It’s a blueprint for acceptable behavior. Leaders are crafting their company culture, which is as much important if not more important than their stated values. Culture determines not just what leaders do when nobody is watching, but what every single employee does behind closed doors.

Leaders can change their company culture by helping to focus attention on specific issues and addressing how the team should react to them. They can help determine how to respond to crises and show what problem-solving should look like. They are a role model for everyone in the company, embracing that power can help others become better too. Leaders get to allocate how to distribute rewards, how they structure it when they reward someone and what they actions merit awards.
Leaders can determine what behaviors they want their employees to take and have positive pressure for them to take those actions. They set the criteria for hiring people. Leaders choose what kind of person company is looking for and what their standards should be. These leaders also decide when someone has crossed the line, or failed and gets fired.
Leaders can choose the flow of pressure for their employees, good and bad, and their behaviors will automatically adjust to the pressures that they put in place.

Traits of leaders with moral integrity

There are many things that will add to the moral integrity that a leader has. A moral leader will without fail: 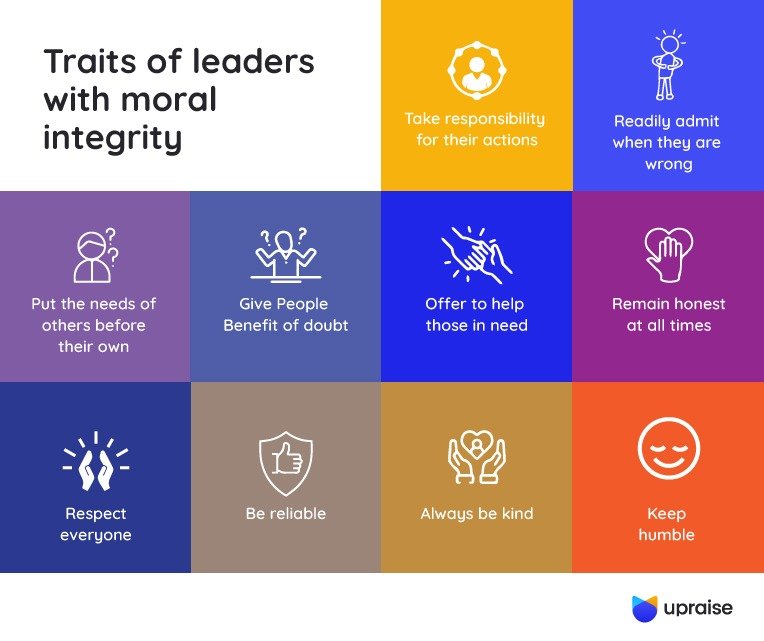 That is a lot to strive for. Those are each good goals for you to set to improve yourself and the lives of those you influence. If that is too much for you to keep in mind all the time, moral integrity can be distilled down to two things: strength and honesty. If you are moral, you are honest with yourself and others. If you have integrity, you have strength. The strength to do the right thing, especially when it’s the hard thing.

According to a survey by LRN, employees feel that morality has an essential role in business decisions. We should have been paying more attention in kindergarten. Like when they were drilling it into us that we should treat others how we would like to be treated. Employees want the company they work for to obey the ‘golden rule’, they want moral managers and they believe morality can improve a company’s resilience.
Of the employees surveyed:

Your customers want you to stand up for what is right as well. For social and political issues, they are interested in knowing what your company believes in and how firm you are on those beliefs. It’s important to note that they don’t want your words. Statements by companies get almost no reactions. It is the actions that companies take that get people to pay attention. If you are telling people anything, announce when you are donating to a specific cause and encourage others to do the same.
It is also imperative that you don’t just go about town making random donations. The impact of your actions depends most on the relevance of your company to those issues. It also depends on who your customer base it. If the consumers you target bleed blue. They are much more likely to want your brand to take stands and will see your positions as much more critical. If you have a more conservative crowd, they will likely be indifferent, as only 52% think that a company taking a stand as necessary as opposed to 82% for liberals.
What do your customer’s care about?
Thanks, Sprout Social for keying us into these insights.

Enron is a classic example of how things can go wrong from the top down. Their two main leaders Kenneth Lay and then Jeffrey Skilling, were initially held in high praise. They surged Enron’s stock price to a peak of $90.75 a share and had a valuation of around $70 billion.
Their flare for using fake holdings and off the books accounting practices allowed them to fool investors of how much money they were bringing in. While their use of special purpose vehicles, (SPVs) and special purpose entities (SPEs) were used to hide toxic assets and piles of debt. If they opened a power plant they would mark its potential income as real income from day one. If the actual profits came in under the projections, they transferred the asset to a corporation that was off the books and not reports the loss.
Jeffrey Skilling, their fearless leader, was an adrenaline junkie and fierce competitor. His belief that it was eat or be eaten trickled down to the rest of his company. He also instituted a grading system for employees, firing employees who failed to meet their performance objectives. Prioritizing cutthroat tactics bred cutthroat traders.
The traders would choke off power to parts of California’s grid, forcing demand and surging the prices. The recording shows men who were not only unashamed of what they were doing but proud of their ingenuity. The lack of moral integrity poisoned Enron from the top down. Having someone in charge whose moral compass didn’t point north lead to immoral actions by his hand and emphasized a culture that did shady things on his behalf.
Does your company have a moral leader? Are you a moral leader within your own sphere of influence? People love and respect those with moral integrity. Customers and employees alike wish for it. We know the damage that being immoral can bring. You know what you need to do, it’s time for you to step up and do it.

1 thought on “The Importance of Your Leaders Having Moral Integrity”

How to create a productive and happy work culture

Everyone wants to work in a productive and happy environment. You can ask anyone if they would want to work in an office that is boring, where nobody enjoys the ...

What Employees Want to help them succeed

Many companies nowadays are trying to attract and retain people with great talent by simply promoting the fact that they have a ping-pong table in the break room. Sure, performance ...

Recognition, the most powerful performance enhancer at the workplace

It is no secret that recognition of hard working employees can benefit a company in many ways. Once an employee feels valued, he will know that his work is contributing towards the success ...